Welcome Buddyfighters to yet another column for Future Card Buddyfight Buzz! Let’s go straight to the topic here! The super powerful new form of Drum has finally been released in Hundred Booster Pack Vol. 3: Assault of the Omni Lords!! Fifth Omni Dragon Lord Drum, is in the house!

As a big fan of big swords, it’s obvious to say that Drum looks mega cool in his new form. Succeeding the will of Tenbu, it seems that Drum has also inherited some of his destruction capabilities! Like a true bud, Drum hits back when you are dealt damage. Talk about an eye for an eye!

Some lucky players who were present at the Bushiroad World Championship Philippines Qualifier a while ago might have a taste of it from playing against our staff who used this all-powerful Drum. But for those who haven’t got a chance to see it in action (yet), I have hand-picked the core cards that help Drum out!

Without further ado, let’s check them out! 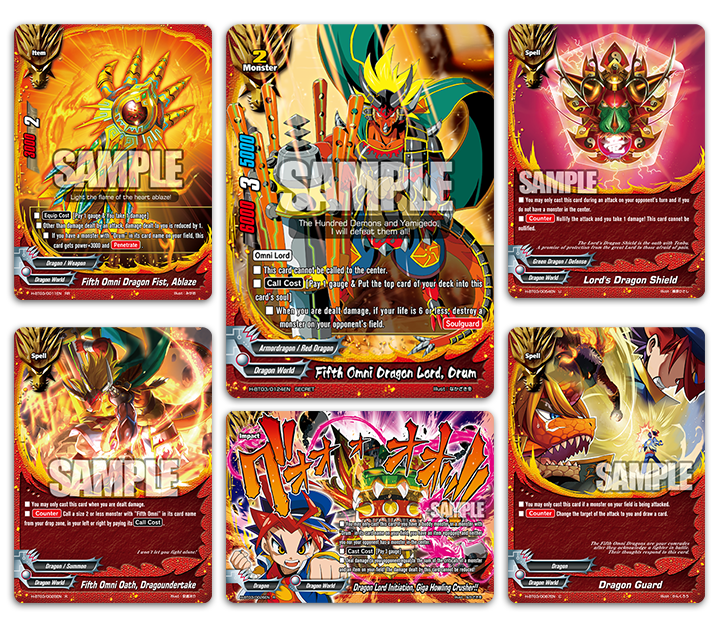 Succeed the will of Tenbu and rise above all dragons! Drum has arrived with the greatest power yet!

Every time you take damage, if your life is 6 or below, Drum’s ability will destroy a monster on your opponent’s field! This ability works every time you are dealt damage, either from an attack or an effect. Best counter against Hundred Demons’ “Thunder Mine”!

As a cherry on top, Drum’s [Soulguard] ability may revive him from destruction at by sacrificing one of its souls!

Totally the trump card to defeat the Hundred Demons and Yamigedo! 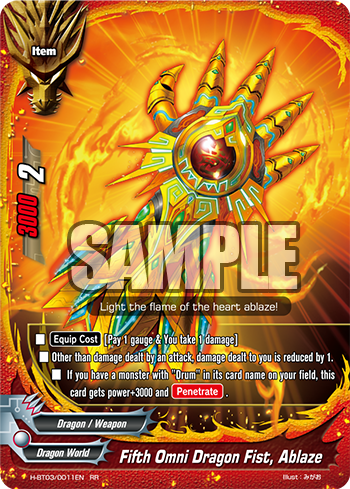 Seal off “Thunder Mine” with Fifth Omni Dragon Fist, Ablaze’s ability to reduce damage that will be dealt to you by 1 for non-attack damages!! Not only that, you may use this card to reduce the damage from “Spectral Strike” and other similar abilities! When equipping the card, you will be dealt 1 damage. Use this to your advantage and destroy an opponent’s monster if you have Drum on your field!

What’s more, with Drum on your field this card gets an additional 3000 power and [Penetrate]! 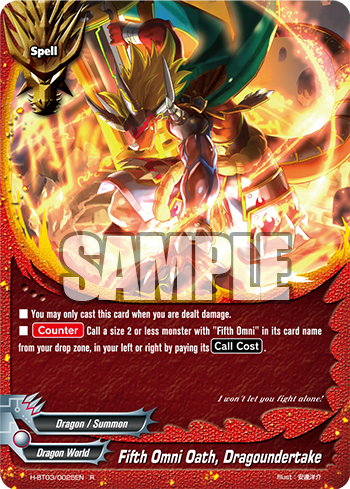 When you are dealt damage, call a Size 2 “Fifth Omni” monsters from your drop zone on your left or right by paying its [Call Cost]! This includes “Fifth Omni Dragon Lord, Drum” and other monsters with “Fifth Omni” in its card name!

Good cards to call include Merak, Arkaid, and even Zakuro! Merak and Arkaid will provide you with some defense, while Zakuro allows you to search for another Drum at a cost of 1 damage! Use that opportunity to destroy a monster using Drum’s ability!! 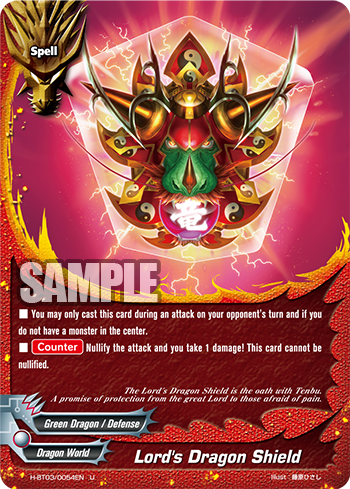 Nullify an attack without fear as this card cannot be nullified! Although seemingly painful at first, if timed correctly, you can use this damage to your advantage! As this damage can trigger Drum’s ability, you can destroy another monster, shutting down 2 attacks with 1 shield!!

What’s more, this card will work with other Fifth Omni archtype monsters as well! Plan out your field to get a full range of effects and capitalize on this damage!

If you already have Ablaze equipped, this shield will deal you no damage!! 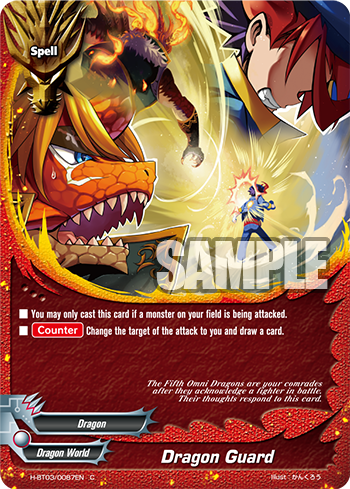 Take damage in place of your monster! This card is really good as it gives you an extra card and provide protection to your monsters. Be careful however, as this card will likely force you to sustain 2 to 3 damages! ヽ(ﾟДﾟ)ﾉ 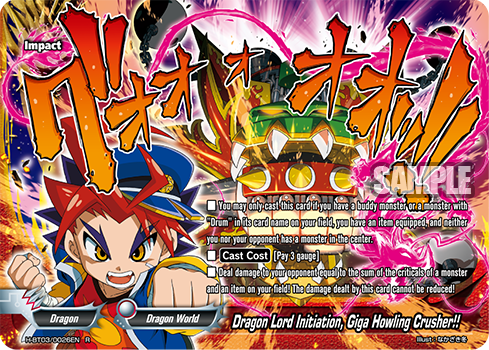 If you are equipped with an item, have Drum, or your buddy monster on your field, and there are no monsters on the center, unleash this devastating Impact card! Deal up to 6 damages if you have a 3 critical weapons and 3 critical monsters on your field!

So what do you think? Drum and his many supports are really cool huh o(*≧□≦)o

There are also other monsters that matches Drum’s abilities, namely The Fifth Omni Cavalry Dragons and The Fifth Omni Armored Dragons who may deliver even further synergy to your Fifth Omni deck!

But all these damage taking really requires you to balance your deck and test your skill in using those Dragon Shields of Dragon World!

It takes a while to get used to, but until next time, wield the giant sword!! Dragon Lord Concussion Slash!!