We’ve landed in the month of June, and it’s time for us to present you another round of reports of Bushiroad Spring Fest 2016 (BSF2016)! Today’s article is a little more special as our staff had the honor to interview champions from recent Buddy Challenge events! Read along to hear about these National Champions~

Before we head to the interviews, let’s take a look at the happenings in the circuit. In the past month, we have successfully held five more Buddy Challenge events in France, USA/California, Germany, Malaysia, and USA/New York. Check out the event photos on our Facebook page! 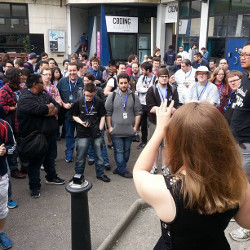 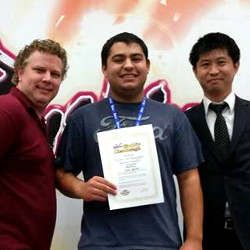 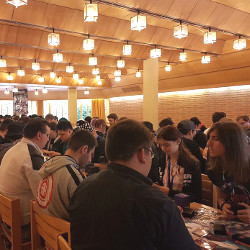 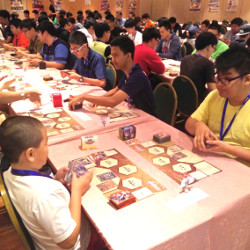 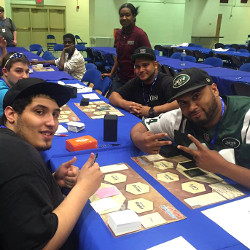 Here are the Top 3 most played Worlds in the Buddy Challenge tournaments around the world so far! The three Worlds of the Dragons still reign over the charts! Closely following at the 4th and 5th places are Hero World and Ancient World! Are your decks among the most played worldwide?

If you’ve noticed, the results have not changed much compared to the breakdown in our BSF report Part 2. Let’s see if other Worlds will steal a spot within the Top 3 in next month’s report!

Take a look at what our staff reported from the events across the three continents in Germany, Malaysia, and USA/New York! We also had the privilege to interview the Buddy Challenge champions. Let’s hear what they had to say about their victory!

There was a surprisingly huge turnout of Swedish players at the Bushiroad Spring Fest held in Munich, Germany! Around fifteen Swedish players raised their flags and seven managed to secure spots in the Top 8! Albin Christianson, a player from Stockholm, came out victorious with his Dragon World control deck and was crowned the German Qualifier Champion. He was really happy about his first major tournament win! 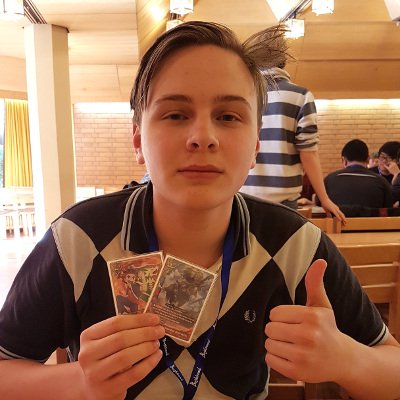 Q: Congratulations on the victory! How does it feel to be crowned National Champion?
A: I feel so overwhelmed. I actually won the overall Swedish meta before coming to Germany but it feels even greater to win such a big tournament. A big shout out to SecRekt Storm!

Q: Did you do anything special to prepare for the tournament?
A: I practiced so much with my friends. The only deck I was really scared to play against was the Darkness Dragon World, Abygale deck. I play a Dragon World control deck, so I don’t have any issues against any match up besides that Abygale deck.

Q: Since you started playing the game, has your deck evolved?
I started with a Danger World deck which a copy of the deck Pontus Liljedahl played at last year’s World Championship. He is a friend of mine and he is so kind to assist me in building the deck and understanding how to play it. Afterwards, I tried playing an 《Asgard》 Legend Deck which I didn’t like that much, and switched back to Danger World. Some month ago after the release of Mikado Evolution, I wanted to build a different Dragon World deck however it was too expensive for me at the time so I switched to a Dragon World control deck instead. Q: Do you have a favorite card?
A: All shields from Dragon World. I like teasing my opponent to think ‘Now is the perfect chance to attack and win the game!’ but then my shield will strike and they will get annoyed.

Q: Anything else you wish to say?
A: The event was one of the greatest experience I have ever had and the organization was really great. A great shout-out to my group, my friend Niklas who won second place, and the whole Swedish community. Without them, my travels and this whole weekend wouldn’t have been so great.

Thank you Albin! Congratulations again and see you in the Continental Final!

The Malaysian edition of Bushiroad Spring Fest 2016 was a resounding success! The Buddy Challenge saw Buddyfighters brawling it out for spots in the Continentals. The event featured many exciting games and high-level play and certainly earned wows from the crowd that spectated the Top 8 Games. It should come to no surprise that the winner for the Buddyfight Challenge is a veteran in the Buddyfight community. Andrew “The Dr3gonking” Phua has been in the scene for a few years and is no stranger to high placings in past official tournaments. He is a true believer of hard work and dedication, as revealed by his interview below. 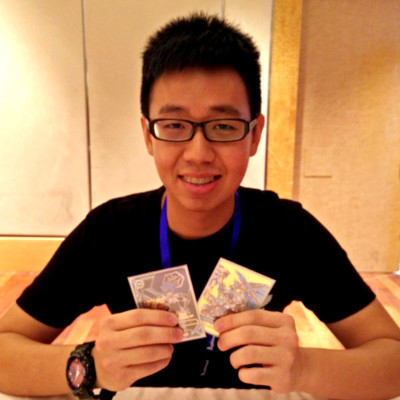 Q: Congratulations on the victory! How does it feel to be crowned National Champion?
A: I usually take quite a while to think for these questions (laughs). Victory is a very generic term. I would say I feel quite proud, and at the same time I feel as long as you put your heart into anything, you can achieve it. Not only in card games but in life as well. I learned that through playing Buddyfight, as it was where I got my first trophy. From that day on, I learned that if you did your best and kept trying, you’ll achieve what you want to do.

Q: Did you do anything special to prepare for the tournament?
A: Starting about a year or two ago, I would visit different card shops before major tournaments. At each card shop I’ll meet different friends. It helps me feel and remember how my journey up to this point has been. I talk to them and remember the old days.

Q: Is this your first time participating in a nation-wide Bushiroad Tournament?
A: It’s not my first time. But when I just started Buddyfight, I would just keep losing until the point when I won my first trophy, which raised my self-confidence. From then on, in most of the major tournaments I’ve gotten at least 2nd or 3rd.

Q: Since you started playing the game, has your deck evolved?
A: I started with Dragon World, which is my favorite deck. Then I moved on to many different kinds of decks, but today I’m using Star Dragon World.

Q: So in other words, if you want to be the best, one has to adopt whatever is the strongest and adapt to using that?
A: That isn’t really the case. For example one of the Top 8 was using Dungeon World. No one uses Dungeon World in Singapore anymore–we come from different countries, he’s Malaysian while I am Singaporean. So there’s no need to be the best, if you really want to be the best you can be, just use your favorite deck. Any world can be the top, it’s just how you try your best. Q: Do you have a favorite card?
A: Drum Bunker Dragon, it’s my first Buddy and the first SP I got. Even though I didn’t use it today, it’s my favorite because of the memories.

Q: If you could pick one character in the Future Card Buddyfight animation you’d like to challenge, who would it be?
A: Now that I’m serving national service, I don’t really have time to watch the animation. I never considered the question but I’d like to challenge the prettiest female character inside. That’s because very few girls play Buddyfight, and I hope more of them would play so I can make friends with them.

Q: Anything else you wish to say?
A: I heard from my friends that Buddyfight keeps moving on to different archetypes. Maybe next time they can support existing archetypes more instead of continuously coming up with new ones like 《Sun Dragon》. But personally I think the event was very good. Maybe next time there can be food, or better prizes, since prizes are what motivate the players to play. The pins this time really inspired players to fight for the top 8.

I would like to make a shout-out to my family and friends for supporting me through. And I would like to say that even if you lose, just keep trying. The more you lose, the stronger you get.

Thank you Andrew for sharing! Congratulations again for your win!

Jon
The Self-Help Guru
For true excellence, all great players must spend immense amounts of time reviewing and analysing their own play. But self-improvement is harder to do the higher your proficiency gets. The Self-Help Guru knows this, and acts as if he is good at improving himself; but in actuality he is a gundu, like everybody else. Being the best is both temporal and relative, and the struggle to be great never truly ends.

Over the last weekend, Westchester was rocked by an onslaught of Buddyfighters who traveled from across NY and the East Coast to compete in the annual Buddy Challenge! The crowd had a good time battling against new and familiar faces! At the end of the day, we have our champion, Robert Russo. Congratulations to him and we hope to see him raising his Flag once again at the Continental Final! 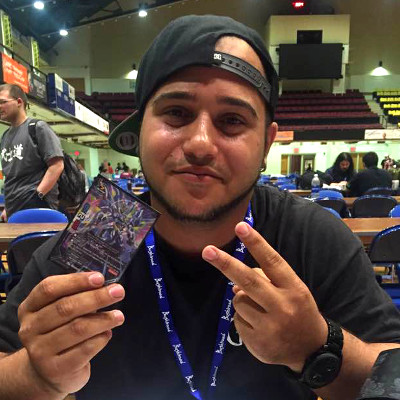 Q: Congratulations on the victory! How does it feel to be crowned National Champion?
A: It feels great! It was much-needed! (laughs)

Q: Did you do anything special to prepare for the tournament?
A: I did a lot of practice, that’s really it. That’s what it comes down to.

Q: Is this your first time participating in a nation-wide Bushiroad Tournament?
A: I’ve played in a previous tournament before.

Q: Since you started playing the game, has your deck evolved?
A: Yeah, my deck has switched Worlds as new sets are coming out. Q: Do you have a favorite card?
A: “The Genesic, Omega Big Bang“, it’s the card that has brought me the win today! (laughs)

Q: If you could pick one character in the Future Card Buddyfight animation you’d like to challenge, who would it be?
A: Tasuku! He’s one of my favorite characters. Before Star Dragon World, I was playing Jackknife Dragon in Dragon world. He’s kind of like me. (laughs)

Q: Anything else you wish to say?
A: The game is fun and I’m glad it keeps growing. The competition keeps getting tougher and tougher, too.

Thank you Robert for sharing! Congratulations again for your win!

Gale
The Future Columnist
Time is of the essence. He can never be in one place at any given moment. The world is vast, and he seeks it.

That’s it for today’s article folks! Do take note that Bushiroad Spring Fest 2016 is nearing its end with only 6 locations left, so for those of you planning to attend our last few Qualifiers, take a look at this schedule and mark your calendars! Don’t forget to check out the event page and our Facebook for the latest updates, too!