Roar of the Invincible Dragons! A Card Review

Ride the powerful waves of the impact monsters!

Are you ready?! Let’s get started!

Dash towards victory with Bal! It’s not surprising that Bal Dragon has become even stronger now, as he has overcome so many challenges recently!

A new evolution of Bal Dragon! When it attacks, you can return up to 3 of your favourite 《Sun Dragon》cards from your drop zone to the bottom of your deck. If you did so, you can destroy a card on your opponent’s field for each card returned! Its high stats are not to be trifled with, either.

A versatile item that works well in both offense and defense, “Sun First, Balguard” is a great addition to any 《Sun Dragon》 deck. It cannot be destroyed by your opponent’s cards’ abilities and it allows the player to protect any 《Sun Dragon》 monster that is facing destruction!

Cut a path to victory with both old and new allies!

Tsukikage is back in a new mode, nin! By paying 1 gauge, it can choose any 《Ninja》 you control and it prevent it from leaving the field the next time it gets destroyed. A cheap ability to ensure your monsters remain intact on the field, nin!

Using Tojikiri Yasutsuna, you can search for a 《Japanese Blade》 monster or item from your Deck and add it to your hand! As if that wasn’t strong enough, as long as you have a 《Japanese Blade》 attribute card in your drop zone, it can gain an additional critical and the coveted [Penetrate] ability.

Make way for the Dragon Chief Emperor! Look out for these support cards which can work well with the recently released Trial deck!

“Underling, Badguy Moto” is a great addition to 《Dragon Chief Emperor》 decks. By discarding this card and paying 1 Life, you get to draw a card and provide a sizable boost in power and defence to one of your monsters in battle!!

Enhance your destructive abilities with dragons from the abyss!

Bal is not the only card that evolves in this set. Abygale obtains a new form as well, and it can whittle down your opponent’s chances of drawing his/her key card. Its devastating ability causes your opponent to send the top ten cards of his/her deck to the drop zone! On top of that, once your opponent has twenty or more cards in his/her drop zone, it can deal 2 Damage to your opponent and give you 2 Life when it attacks. It works very well with existing cards such as “Black Drain” and “Black Cradle, Crabius”, too.

Bigger is better, as they say! “Blackslash Ghost Dragon, Galnibael” can send the top card of your opponent’s deck to his/her drop zone when it appears on the field and when it is destroyed! This will help to fuel its second ability, which allows you to destroy one of your opponent’s monsters when Galnibael attacks! It also has the [Double Attack] ability, which means you can attack twice and destroy 2 monsters! It is also difficult to remove from the field due to its [Soulguard] ability, allowing Galnibael to stick around for a while and help you gain control of the game!

That concludes our showcase for Triple D Booster Set 2: Roar! Invincible Dragon!!! I hope you will be able to encounter some of these powerful new cards, as well as some of the highly sought after reprint cards when opening your packs!

Keep your eyes peeled for the Dragon Chief himself as he will be looking for strong fighters worthy to be a part of his league! 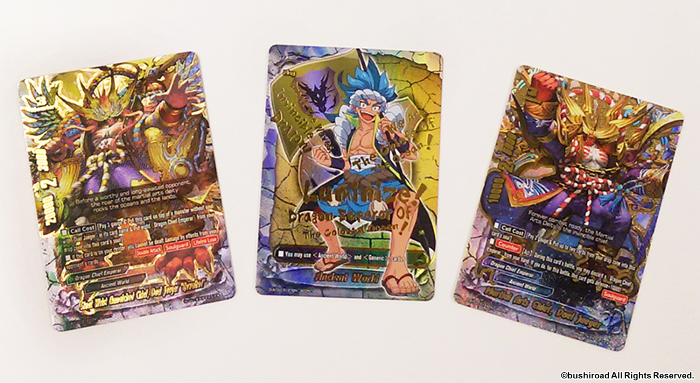 Dai Kaido and his mighty aides!

Let us know what you think about these new cards and how you plan to include them into your decks. Until next time!