In the previous two seasons of Future Card Buddyfight animation series, we have witnessed one of the strongest Buddyfighters, Kyoya Gaen, attain many victories with his fearsome buddy, Azi Dahaka. Championing a unique flag, Dragon Ein, Kyoya can use cards from all worlds as long as they possess “Dragon” attributes.

Prepare to witness the power of “Dragon Zwei” and “Azi Dahaka”!!!

Now in Future Card Buddyfight Triple D, his deck has evolved into a stronger, never-seen-before, Dragon Zwei deck! We will unravel his secret powers in this article just for you! Attain the power of Dragon Zwei within the Triple D Booster Pack Vol. 3 (D-BT03): Annihilate! Great Demonic Dragon!! releasing tomorrow, October 21st! 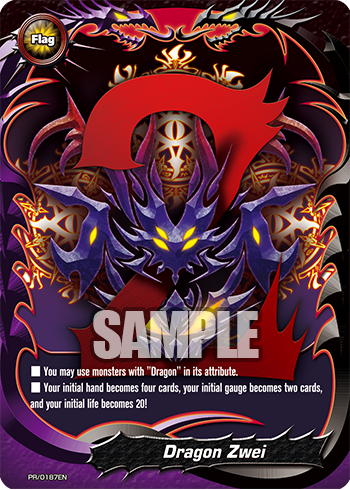 Dragon Zwei is the Flag evolved from Dragon Ein, which enables monsters and Impact monsters with “Dragon” in its attribute to be under your command. Though Dragon Zwei prohibits the usage of Spell, Item and Impact, you will in turn, start with a life of 20 at the beginning of the game!

With just “Dragon” attribute monsters in your arsenal, you may find it challenging to build this unique deck, especially when you can only include monsters. To help you get started, take a look at the sample deck list we have prepared for you! 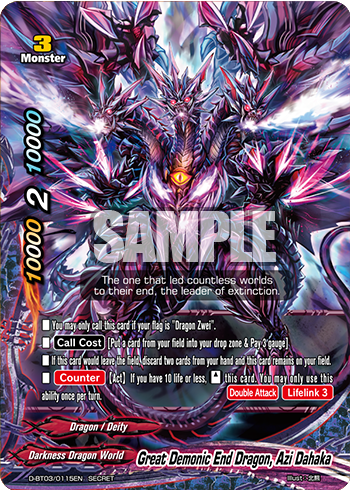 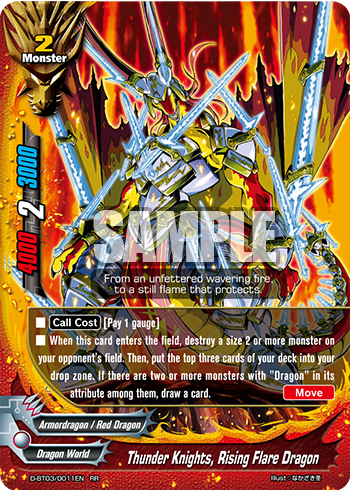 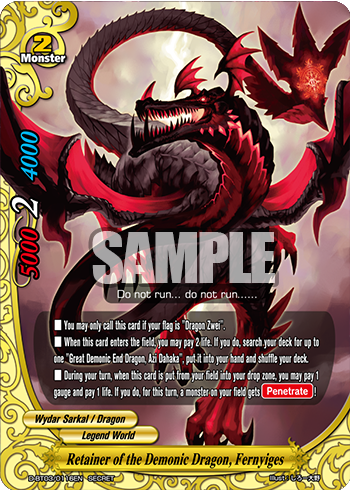 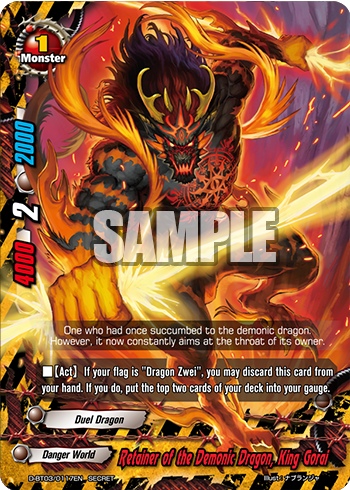 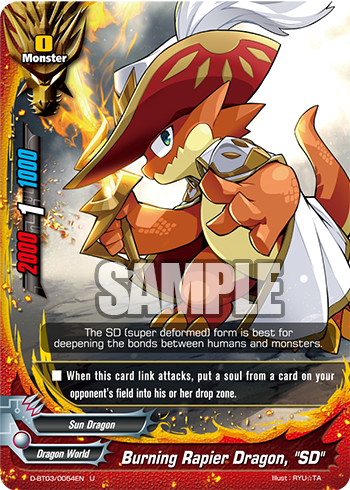 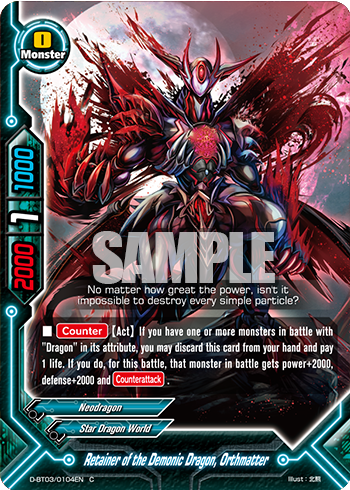 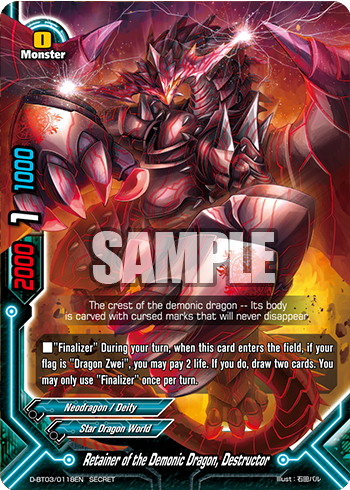 ★ Here are the loyal aides that will bring you victory! ★

Dragons that give you a helping hand!

Like Dragon Ein, Dragon Zwei reduces your starting hand to just four cards, which can be difficult for the player to obtain the card they need at the beginning of a match. Thus, you need a decent draw engine to get what you want. Fortunately, there are dragons that can tackle this issue. “Rescue Dragon Leader, Immortal Spirit” is one dragon that can potentially draw two cards when it destroys a monster with its [Double Attack], and “Dragon Knight, Pisaro” can help you to get a free draw when you [Rest] it.

Retainer of the Demonic Dragon, Destructor

“Retainer of the Demonic Dragon, Destructor” is another good card to handle this typical problem of a Dragon Zwei deck (also, its ability only works when used in a Dragon Zwei deck!). Its [Finalizer] ability allows you to exchange 2 Life to draw two cards. Having 20 Life, you can easily draw these additional two cards!

Dragons that ease the cost of big creatures!

Many strong cards within the Dragon Zwei deck have hefty call costs and ability costs, and you will end up using plenty of gauge. Therefore, you’ll need some cards to generate additional gauge. “Death Wizard Dragon” and “Retainer of the Demonic Dragon, King Gorai” are two nice cards for that purpose. “Death Wizard Dragon” can add cards to the gauge by taking 1 damage (which again, shouldn’t be a problem considering you have 20 Life!) while “Retainer of the Demonic Dragon, King Gorai” can be discarded from your hand to provide 2 additional gauge!

When your starting hand is smaller, you have the option to mitigate this problem by having cards that can generate as much advantage as possible. Fortunately, there are new cards in D-BT03 which might just be the solution to that problem. “Transcend Dragon Emperor, Ewigkeit” is a Size 3 Neodragon/Dragon Lord monster which allow you to put the top three cards from your deck to the drop zone. You may call a monster from it, at the low cost of paying 2 Life. That’s not all, the monster that you called out will be treated as a Size 0 on the field! “Thunder Knights, Rising Flare Dragon” is another handy card as it can destroy one of your opponent’s monster when it enters the field. This destroyed monster will be Size 2 or more and you can draw one extra card from your deck as well!

The Dragon that ends it all!

Once everything is covered, it is time to unleash the boss of Dragon Zwei, the “Great Demonic End Dragon, Azi Dahaka”. It doesn’t seem like it has evolved much from its previous forms, but it has the potential to attack up to three times when you have 10 or less Life! Also, by simply discarding two cards from your hand, you can prevent it from leaving the field. Azi Dahaka will stay to deliver the finishing blow!

Retainer of the Demonic Dragon, Fernyiges

“Retainer of the Demonic Dragon, Fernyiges” is a good card that synergizes with Azi Dahaka! It allows you to search one “Dragon Zwei, Great Demonic End Dragon, Azi Dahaka” from your deck and place it to your hand quicker by paying 2 Life! Moreover, if you sacrifice it as part of Azi Dahaka’s call cost, you can make Azi Dahaka even stronger with [Penetrate]!

That finally wraps up this week’s long article. Hope you guys get a better idea on how to play a Dragon Zwei deck. There are certainly many possibilities on how to build this deck, and we can’t wait to see which variety of Dragon Zwei decks will top the tournaments!