The setting: a remote region of Magic World.

In this region was an ostentatious mansion that stood out from its surroundings.

Within that mansion, two men were hatching a scheme.

“What’s the word on the magic power accumulation rate, Damian?”

“My device is functioning perfectly. Our underlings are working as hard as they should be. Just as we planned, we’ll have all the magic power we need by tomorrow. Terry, I hope your preparations are coming along as well?”

“Of course. I just finished placing the final keystone. Now we can activate the Extreme Spell whenever we want… Just as soon as we have enough magic power.”

“Time for our greatest wish to be realized.”

“Time to build our ‘Kingdom of Shadows’.”

[Terry], the nobleman dressed in red, and [Damian], the nobleman in navy. These two had created a magic power accumulating device in the basement of this mansion to gather massive amounts of magic power to fulfill their ambitions. 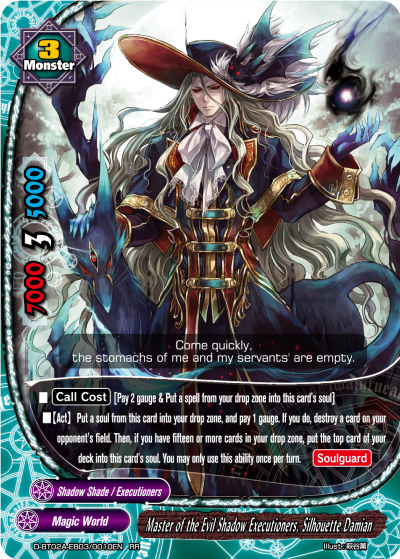 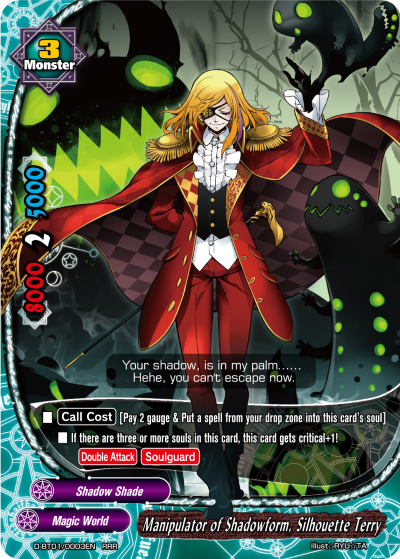 As a result, the surrounding trees were blighted, the magical beasts were starving, and the magicians and demons were struggling with poverty.

Of course, these two noblemen didn’t care about that. Establishing their own private paradise was their top priority. Anything else was a trivial detail in their minds.

It was under these circumstances that a certain announcement reached these two noblemen.

Through the mansion’s window, a rectangular card flew in like an arrow and embedded itself in the floor.

Terry looked around cautiously as he picked up the card.

“What’s the deal with this mark?”

The card was decorated with a crest in the shape of a dragon wearing a top hat. As Terry turned the card over, he saw text that read:

[Tonight, when the clock’s hands overlap at the summit, we will appear to steal the magic power.
Sincerely, the Drago Phantom Thief Troupe]

“Drago Phantom Thief Troupe? Damian, do you have any idea what this is about?”

“…I’ve heard stories. They say there’s a mysterious troupe of phantom thieves, and nobody knows where they come from, or where they call home. They appear out of thin air, steal magic power, and disappear.”

“So this gang that might not even exist sent us this announcement? That’s ridiculous. This must be a prank by someone who has a grudge against us.”

“Even if that’s the case, our plan is almost complete. We can’t be too careful. Perhaps we should take extra precautions.”

“In that case, I shall reinforce the defenses underground.”

“And I’ll increase security around the mansion.”

Terry and Damian parted ways, and took action to make the mansion secure.

It was almost nightfall, and the moon was becoming faintly visible in the sky.

It looked like it was going to be a full moon.

It was late at night, and the appointed hour was fast approaching.

Terry and Damian had gathered in the first floor lobby.

The area around the mansion, as well as each room and the underground facility, were being patrolled by their familiars.

“Do you think they’ll really come?”

“Who knows? We’re not even sure these fellows exist.”

“Well, either way, it’s impossible for them to slip through our magical defenses and steal that massive amount of magic power.”

Terry snickered, and checked the time.

In just a few seconds, it would be the time written on the announcement.

“As I suspected, it must have been a prank.”

The pair had relaxed for just a moment, when…

Suddenly, the familiars in the basement alerted them to a disturbance.

The two noblemen looked at each other, and immediately headed into the basement.

When they got there…

The pair stood in front of the device and couldn’t believe their eyes.

Just a moment ago, there had been nothing wrong with the machine.

They had been moments away from successful completion of their plan.

The magic power that had been gathered over several months had completely vanished from the device.

Terry collapsed to his knees and held his head in both hands.

The magical defenses should have been perfect.

The familiars hadn’t alerted us to any issues until a moment ago.

And anyways, it simply wasn’t possible for such a massive amount of magic power to be stolen in an instant.

Even the greatest magician wouldn’t be able to move that much magic power without any advance preparation.

And doing that without either of us noticing was impossible.

I personally strengthened the mansion’s defenses.

And Damian reinforced the defenses in the basement.

There was no way that someone could avoid those defenses, unless they were Damian or myself–

At that point, Terry thought of a terrible possibility.

He didn’t want to think that the familiars or Terry himself could have failed to notice, but it would certainly explain the baffling events that had unfolded before his eyes.

Terry nervously, hesitantly looked up at the figure next to him, the person that was allegedly Damian.

“Are you really Damian?”

Damian’s face was shadowed by his hat, and his expression could not be seen.

“Then say my nickname.”

“To create a kingdom of shadows.”

“Then…When did we first meet, and share our ambitions with each other?”

There was a brief silence after Terry’s question.

“…Heh heh. I guess there’s no reason to keep hiding the truth.”

As Damian said these words, he tossed his hat aside.

The figure that revealed himself was not Damian, but instead a humanoid dragon whose face was hidden behind a mask.

As an enraged Terry stood up, he manipulated his own shadow as if it were a living creature, and attempted to skewer the humanoid dragon.

But the humanoid dragon dodged the shadow elegantly, used his powerful legs to leap into the air, and hung on to the ceiling. His disguise as Damian had disappeared without a trace, and his green cape and humanoid dragon limbs could clearly be seen.

“I hadn’t introduced myself. I am [Phantomaria Ludman]. You might say I act as a sort of vanguard for the Drago Phantom Thieves. After all, I am a master of disguise.” 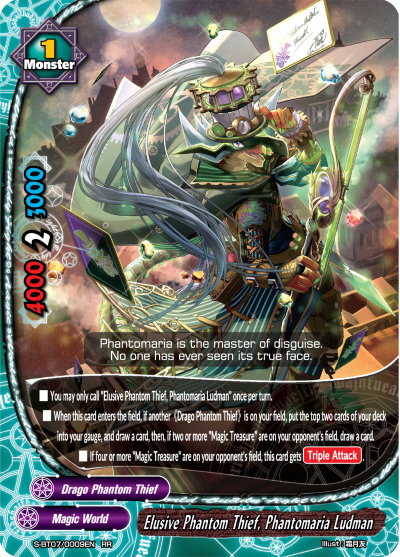 Ludman said all of this breezily, while Terry glared at him furiously with bloodshot eyes.

“Yes, yes, you must be worried about your dear friend. But please put your mind at ease. He’s sound asleep, under the tender care of the Drago Phantom Thieves. Why, at this moment he might be building his kingdom of shadows in his dreams. Of course, we guarantee his safety, and will return him to you at a later time.”

“How long?! How long have you replaced him?!”

Terry’s shadow closed in on Ludman again and again, but Ludman leapt from wall to wall, easily avoiding the attacks. Terry’s attacks bored into the ceiling of the basement as they missed their target.

“Today, after we received the announcement from the Drago Phantom Thief Troupe, the two of us separated to reinforce the magical defenses. Was that it? Was that when you kidnapped Damian? Curses, curses, curses! If only I’d been with him!!!”

“What? Oh no no no no, you must be joking. Even I wouldn’t take on such a risky task so close to the deadline. Yes, yes, I replaced him about a month ago. Lord Damian left the mansion to gather some magical plants, and I saw my chance.”

Terry’s eyes opened wide in shock, and he covered his face with both hands in disbelief. For an entire month, he had been speaking to this impostor, rather than the comrade who shared his ambitions. The very thought of it left him speechless.

“Now, Lord Terry. The finale of our Drago Phantom Thief caper is approaching. Please, look up at the skylight that you yourself have opened in the ceiling.”

The holes that Terry had pierced in the ceiling had reached all the way to the surface, and had created a large opening. Through that opening, the night sky and full moon were on full display.

The moment that Ludman said this, a large cloud appeared and hid the full moon. The cloud gradually dissipated and its contents were revealed. There were many gears and a steam engine. With the full moon as its backdrop, a massive mechanical floating island appeared in the sky.

“Come, come, see with your own eyes! North, South, East or West, this marvel will arrive to steal treasures from the wicked and disappear! This is our Sky Castle of Drago Phantom Thief!! This is Lebla Maurice!!!” 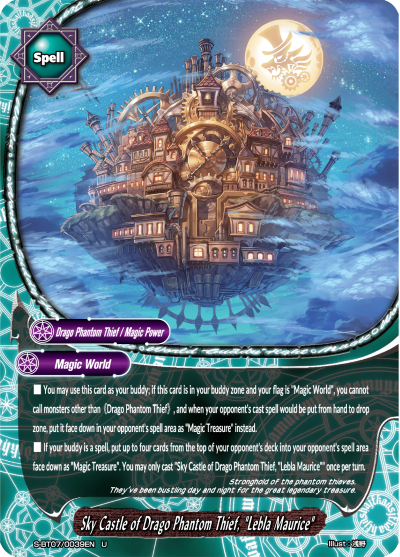 All around the newly-revealed Lebla Maurice, multiple small aircraft shed their camouflage and appeared. These small craft were loaded down with bubbles containing the magic power that Terry and Damian had collected, each connected to the next.

Terry reached towards the sky, but of course the bubbles were beyond his grasp.

“It’s a good thing to have dreams, but that’s no excuse for harming people unrelated to your scheme, and making them unhappy. The next time that you wish to accomplish something like this, we hope that you will prepare a plan that is kinder to yourself and others. And with that, I shall take my leave of you this evening.”

Ludman leapt through the hole in the ceiling to the ground, and a small craft appeared and picked him up, as if it had been waiting for him. The small craft was piloted by a humanoid dragon wearing a pitch-black mask that blended into the night sky, and a black and red cape.

“My name is [Winds Harry]! Tonight, as always, the Drago Phantom Thief troupe shall treat you to an elegant caper!” 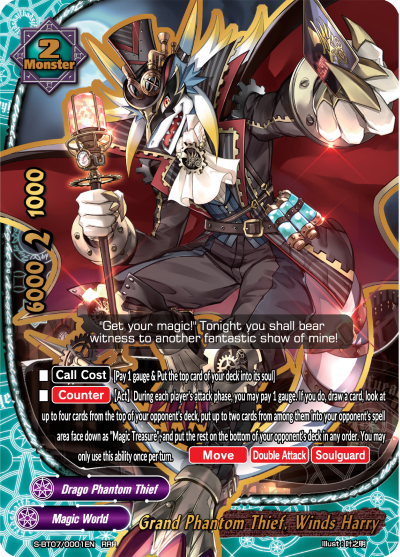 As Ludman stepped on to the small craft, Harry changed places with him, standing atop the craft and spreading his arms out wide as his cape billowed behind him.

The small craft sped up and returned to Lebla Maurice in the sky. As it did so, one by one the bubbles of magic power connected to the small craft burst and fell down to the earth. The concentrated magic power spread through the sky, refracting the light and tinting the sky in rainbow colors like the aurora.

Lebla Maurice and the small craft were hidden by the clouds, and vanished completely.

And strangely enough, the crest of a dragon wearing a top hat could be seen on the full moon left hanging in the sky.