Nice to Meet You!

Ancient World has always offered a unique style of play with mechanics and effects that center around maintaining a strong presence on the field with a powerful size 3 monster. This hasn’t changed much with the introduction of the Raging Spirits attribute monsters – in fact, they’ve become even stronger than before!

The recently released Hundred Booster Pack Vol. 3: Assault of the Omni Lords, introduces several additions to support the Raging Spirits, and with it comes a powerful new Omni Lord with an amazing effect! Can you handle the heat?! The chief is going all out! 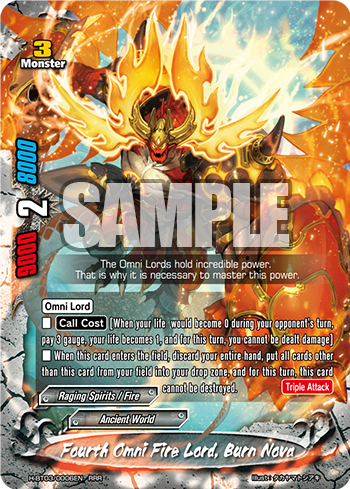 At the very last minute, the chief will unleash his true form!!

Charging head-first onto the field to save the day – Burn Nova appears! When your life is reduced to 0, you can call Burn Nova onto the field, and your life will be set to 1! As a [Call Cost] cannot be countered, your opponent is powerless to prevent this absolute beast from stomping in. Not only does Burn Nova prevent you from taking any further damage, he also cannot be destroyed until the end of that turn!

With his [Triple Attack], he can even help you turn the tide of battle and finish your opponent off in one fell swoop. Few opponents can stand up to the power of a massive 9000 attack with 2 critical that hits 3 times!

Don’t forget, though – Burn Nova is an Omni Lord, which means he can be played in any deck. Keeping one copy in your deck regardless of the World could go a long way to ensuring your survival.

Underling of the Fire Lord, Ricky 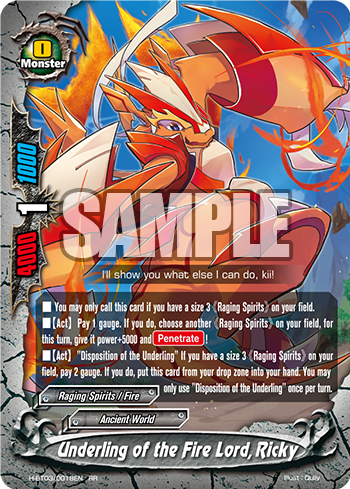 Underling of the Fire Lord, Ricky

Burn Nova’s powerful effect comes with a steep cost, but not all is lost! Even if you have to discard all the cards in your hand and destroy all the cards on your field, the underling of the Fire Lord will still stand by his chief!

When you have a size 3 Raging Spirits on the field, if Ricky is in the drop zone, you can pay 2 gauge to retrieve Ricky back to your hand. Call Ricky alongside the chief, and he can give Burn Nova a whopping +5000 power and [Penetrate]! This effect is can be used on any of the Raging Spirits on your field, be it “Ethereal Overlord, Gang the King”, “Wicked Dragon Emperor, Billion Knuckle” or even “Sky Splitting Armor, Masurao”.

Great stuff, huh? New cards are cool and all, but let’s back-track a little to take a look at some of the older cards that synergize well with the Raging Spirits deck. Some of these cards will be reprinted in the upcoming Hundred Extra Booster Pack Vol. 4: Buddy Allstars+, so do look out for them! 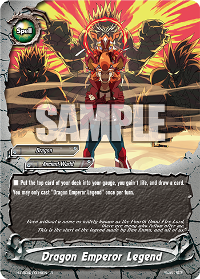 An old card reprinted with swanky new artwork, featuring none other than the chief himself! “Dragon Emperor Legend” was first introduced in Extra Booster Pack Vol. 1: Immortal Entities, and allows the player to draw a card, gain 1 life, and charge 1 gauge. With three beneficial effects in one card, it’s hard to find a reason not to include this card into your deck. 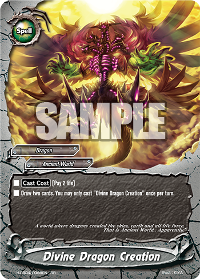 “Divine Dragon Creation”, another card being reprinted, is a card that allows the player to increase the number of cards in their hand. This card uses the player’s life as a resource instead of the gauge, so as to reduce the pinch of playing so many size 3 monsters – each one of these size 3 Raging Spirits cost anywhere from 2 to 3 gauge to call, so it’s important to conserve. 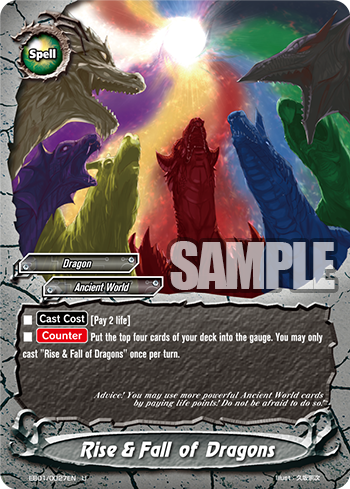 If you are equipped with an item, have Drum, or your buddy monster on your field, and there are no monsters on the center, remember how we said that gauge is an important part of the deck? This card can be used in clutch situations to squeeze out the extra gauge to use for counters, or even to use for the [Call Cost] of Burn Nova! Be careful, though – you cannot use “Rise & Fall of Dragons” on your opponent’s turn to reduce yourself to 0 life to call Burn Nova if you don’t have enough gauge to call him before “Rise & Fall of Dragons” resolves.

That rounds up our Ancient World feature! There are, of course, many other powerful cards that you can use in the deck, like “Gathering of Armed Dragons” and “Surging Dragon Waves”, but these are some of our favorites. What other cards do you play in your Ancient World deck?