What’s cooler than heroes? Villains of course! What better way to welcome of Hundred Perfect Pack Vol. 1: Terror of the Inverse Omni Lords just released last Saturday, than a feature of these evil beings! 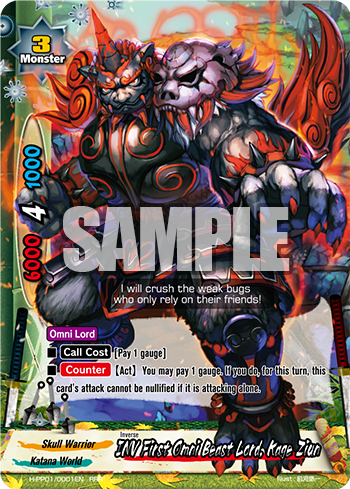 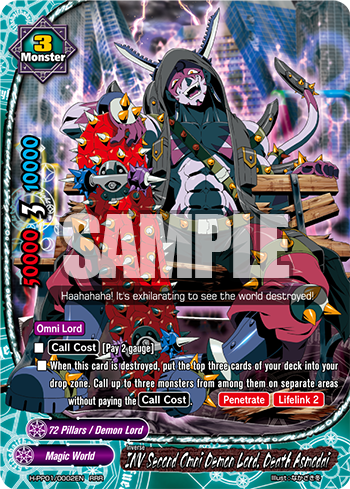 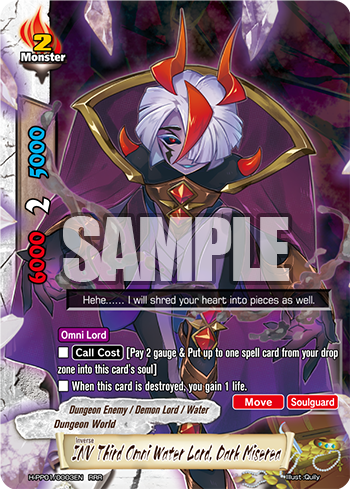 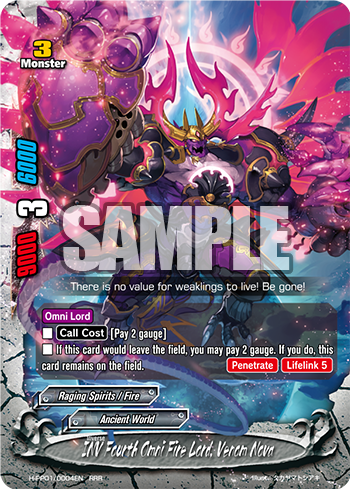 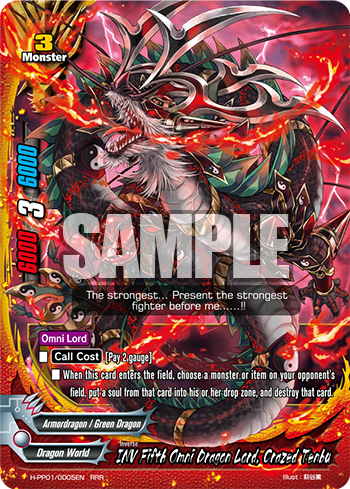 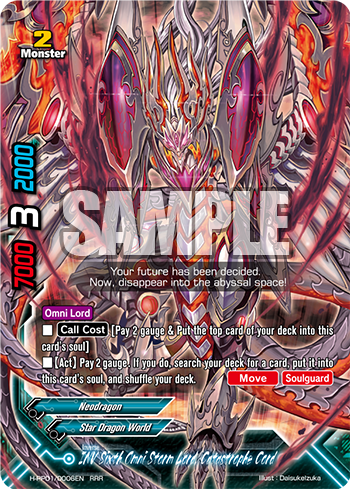 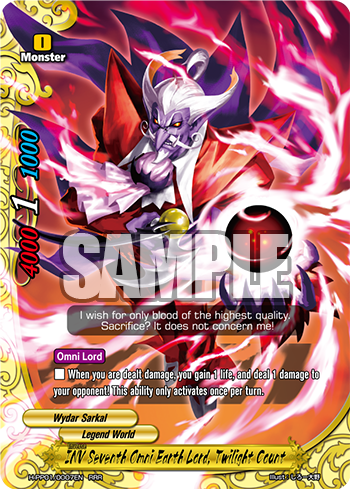 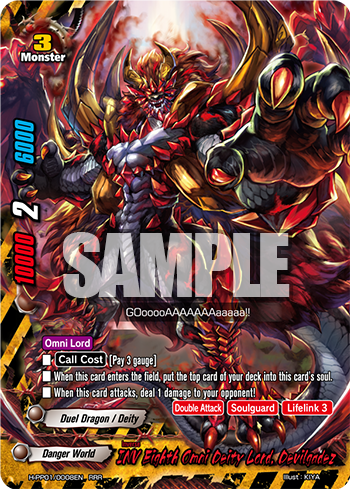 Born from the power sapped from the heroic Omni Lords during their battles within Yamigedo, these dark, powerful monsters are splitting images of the original Omni Lords, but are as different as heaven and earth in terms of personality.

Used by Jin Magatsu in his Katana World deck, the furious, egoistic Kage Ziun is the exact opposite of the friendly Ziun. Incredibly aggressive, this card sports a mega critical of 4! With a Call Cost of only 1 gauge, this beast can storm the field and deal quick, deadly damage to your opponent at the blink of an eye!

In the deck of Suzuha Amanosuzu, Death Asmodai is a maniacal demon—a stark contrast to the sly but loyal Demon Lord, Asmodai. Its ability allows it to put the top 3 cards of the deck into the drop zone when it leaves the field, then call out up to 3 monsters from those cards on to the field! If you’re lucky, you could even get another “INV Second Omni Demon Lord, Death Asmodai” out on the field! Talk about seeing the world burn.

Lending its power to the deck of “Tiger” Noboru Kodo, the sadistic Dark Miserea is one who can’t be bothered to play by the rules. Opposite to Miserea, this card defies [Lifelink] by giving life to the user when it is destroyed. Owing to its good stats, “INV Third Omni Water Lord, Dark Miserea” is a pesky and irritating card to fight against.

Venom Nova is a monster that believes in only individual strength, unlike Burn Nova who believes in the strength of all. It is currently being used by Genma Todoroki. To wield its maximum potential, the entire deck is built to harness Venom Nova’s abilities. Only the strong shall survive!

Originally in the deck of Death Shido, it ended up in the deck of another mysterious fighter! Crazed Tenbu is clearly not a gentledragon like Tenbu, as it only driven by a desire to crush all in its path. Likewise, the card’s ability and relatively cheap Call Cost allow it to easily destroy any monster or item on your opponent’s field!

Packed in the deck of Sophia Sakharov, Catastrophe Cord—the dark doppelgänger of Variable Cord—only desires for a future of despair. With its ability to get numerous Dragonarms into its soul, not only can Catastrophe Cord gain multiple abilities, it can also abuse Master Protection to keep itself on the field for a long time.

Lending its power in the deck of Legend World fighter Kemura, Twilight Count only seeks out his primal instincts of feeding rather than being the wise voice of reason like Count Dawn. Its’s ability gives the fighter 1 life every time the fighter is dealt damage, and it returns the damage to the opponent! What a frightening monster!

Smashing his way into our list, Devilgadez is lending his monstrous power to the cheating fighter Davide. Unlike Grangadez, Devilgadez succumbs to only its impulses to destroy. With [Double Attack], Devilgadez can cause serious hurt to the opponent. An incredible force to be reckoned with!

On top of the eight dark doppelgängers of the Omni Lords, there are two cards from Hundred Perfect Pack Vol. 1: Terror of the Inverse Omni Lords that especially piqued my interest! Check these out! 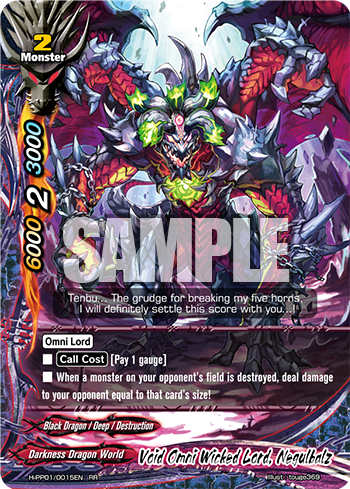 Even though it is not an Inverse Omni Lord, I bet everyone is curious about this evil being who holds the same title. As Negulbalz is not featured in the animation (so far =P), let’s reckon its story by taking a closer look at the card. Negulbalz is the Void Omni Lord that has descended into Darkness Dragon World, and it may have perhaps been a candidate for the Fifth Omni Dragon Lord–as its five horns were broken by none-other than Tenbu himself. It possesses abilities that seem very similar to [Spectral Strike]; it deals damage to the opponent after destroying his or her monsters in an attack, but the damage dealt being equal to the size of that card. As they say, the taller they stand, the harder they fall… 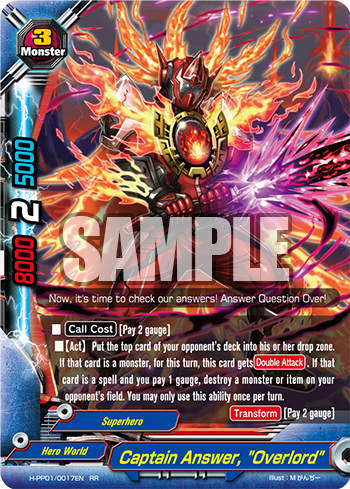 It surprised even the Future Card Buddyfight Team in the Bushiroad office when we discovered the sudden twist in his story development! As the plot is still ongoing, I shall not divulge any further information about him. As a card, the powerful abilities of “Captain Answer “Overlord”” are as hot as he is fiery! It’s Game-Over(lord) to those who stands in his path!

It’s been three awesome weeks of great ancient monsters! So what do you guys think? Which one do you like more, the righteous Omni Lords, or the villainous and cool Inverse Omni Lords? Let us know via Facebook or Twitter!

Don’t forget to check out our official YouTube channel as the final episodes of Future Card Buddyfight Hundred series are being released! 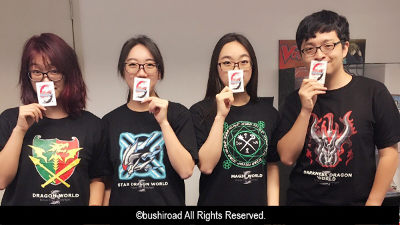 Meanwhile, do you still remember the “Wear Your Favorite World” voting campaign we conducted last December? These T-shirts will be available exclusively at the Bushiroad Online Shop in March! We had our “office models” try out the T-shirts and sure they are looking great in it. Hold your excitement as we will reveal more details about these T-shirts in next week’s column!

This is all for this week’s article, see you next Monday!