The Weapons Make the Man! – Picking Out the Right Items for Your Deck

Hello, Buddyfighters! There’s less than three weeks to go before the Bushiroad Spring Fest kicks off! The festival begins with its first regional qualifiers in Atlanta on February 27-28, and will happen in 25 cities all around the world until early-July. Are you ready for the Buddy Challenge? 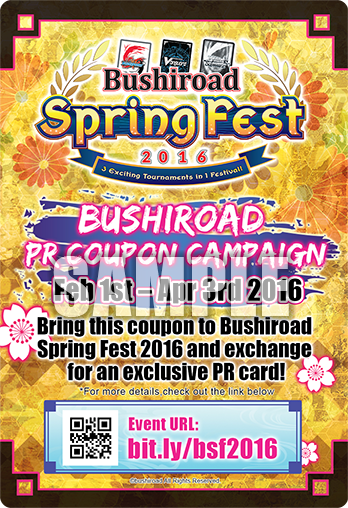 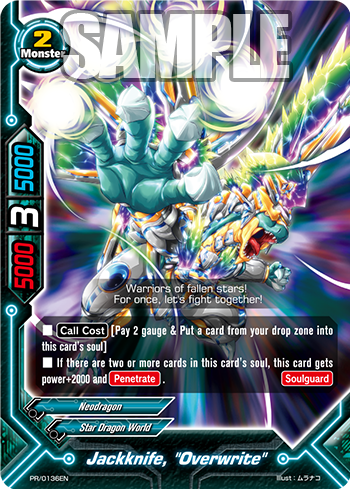 Don’t forget about the ongoing Bushiroad PR Coupon Campaign, too! When you participate in the monthly shop tournament at your local stores between February 1 – April 3, you may receive the PR coupon, which you can then exchange for the campaign exclusive “Jackknife, “Overwrite”” PR card on the day of the regional qualifier! This is the perfect chance to experiment using variety of deck builds and play styles in the shop tournaments! You’ll be killing 2 Bladewing Phoenixes with one attack (is that how the saying goes?!)!

On the topic of deckbuilding, previously we’ve discussed about the different types of spells and how players can use different spells to achieve different play styles. Today, we’ll be covering another type of card – the Item!

While it isn’t usually necessary for players to include Items in their decks, Items often have beneficial effects that can enhance the strengths of a deck or, as is the case for Danger World and Hero World, it can be the entire focus of your deck. Some decks don’t need them, because they’d rather fill the playing field with monsters instead – you can’t attack with an Item when there’s a monster in your center, after all!

For today’s article, we’ll be using mainly Dungeon World Items as examples to illustrate what kind of Items there are, and what kind of deck you’d use them in!

Let’s kick this off with a generic Item with no special abilities. Most worlds have equivalents, but a basic weapon would look something like “Conquering Blade, Dungeon Domination“. There are similar cards for most other worlds, such as “Martial Bones Fist, Dragosquare” that boasts comparable power, or slightly lower power with higher critical like “Demonic Spear, Swirling Darkness“. There are even cards that offer more power but have lesser critical, like “Hungry Claw, Raiga“.

While these cards have no other beneficial effects, they usually have slightly more power than others around their tier with effects. If that’s what you’re looking for in an Item, then these Items are the ones for you.

I’ll Lend You a Hand!

Next, let’s take a look at Items that are best played to complement specific traits. These cards often offer powerful effects that complement other cards in your deck with that trait, and vice versa. One such card is “Brave’s Sword, Soma Sword“, an Item that works best in a Dungeon World «Adventurer» deck! Adventurer cards often gain additional abilities when they perform link attacks with other «Adventurer», and with this Item, you can fulfil that condition while also triggering this card’s own effect to give itself [Penetrate]! The Item itself also has the «Adventurer» attribute, which will help it fit into the deck.

Another such Item is “Adventurer’s Staff, Alcsbane“, an Item that supports the «Dungeon Enemy» attribute. You’ll get to put a card from the top of your deck to the gauge if this card’s attack destroys an opponent’s monster in an attack, but only if you have a «Dungeon Enemy» on the field. Of course, to make sure you can use the effect, you’ll want to play plenty of «Dungeon Enemy» monsters in your deck! As many Dungeon World cards often refer to both «Adventurer» and «Dungeon Enemy», you’ll need to find a good balance of both attributes to be able to use these types of effects reliably.


Definitely consider these cards when building decks with these attributes!

Next, we have cards that are a little different from the others in terms of effects. While most Items synergize with a specific playstyle or trait, these Items often have abilities that don’t directly complement the deck, but have strengths that warrant their inclusion.

One such card is “Dragon Vanquishing Sword, Dragonslayer“. While it doesn’t directly gain additional effects or boost an attribute, it offers a very specific counter to “Dragon” attribute cards as it doubles its own power against them! Armordragons and Neodragons alike are affected by this ability, so if you’re playing against a Dragon World player, you’ll definitely want to try this card out. It won’t be as effective against decks like Legend World or Magic World, so put this card in your sideboard and unleash it against Dragon users when the time is right!

Another such card is much more powerful, and can be found in most Dungeon World decks. That’s right – I’m talking about “Brave Equipment, Glory Seeker“. It offers a sizable 5000 power and 3 critical, as well as an ability that gives the player a chance to revive if their life would become 0! This unique ability forces your opponent to play around it, giving you more leeway in terms of decision making and allowing you to play more aggressively!

These Items can find a place in almost any deck, so go ahead and put them in your deck! Other special Items like these include the powerful “Jackknife “Gold Ritter”” and “Demonic Demise Sword, Aqulta Gwaneff“!

Two Is Better Than One!

Dungeon World also has access to an interesting set of weapons. Generally, players can only have one weapon equipped at any given time, but with this pair of Items, you can bend that rule a little.

“Savage Lance, Eisen Tiger & “Flash Lance, Blitz Tiger can be equipped at the same time due to “Flash Lance, Blitz Tiger”’s effect. They are treated as separate Items as well, which means you can either attack with them separately, or use them together in a link attack! Just equipping these lances and having a monster on your left and right slots allows you 4 attacks in a turn, which means these weapons belong in more aggressive decks.

The most important thing to keep in mind when selecting a weapon for your deck is to consider if it fits the deck’s theme and style, or if it is able to make up for a deficit in your current build! Improve on your strengths, or alleviate your weakness! Personally, I prefer capitalizing on a deck’s strengths, which is why I like items like “Explosive Axe, Ricdeau Demon Slay“.

For you Dungeon World players to who have tried out these Item cards to enhance your decks, let us know how they worked for you! Drop us a comment on Facebook or e-mail us at sg_support@bushiroad-gp.com!

That’s it for today’s article! Do pop by next week for more Buddyfight related news and tidbits!